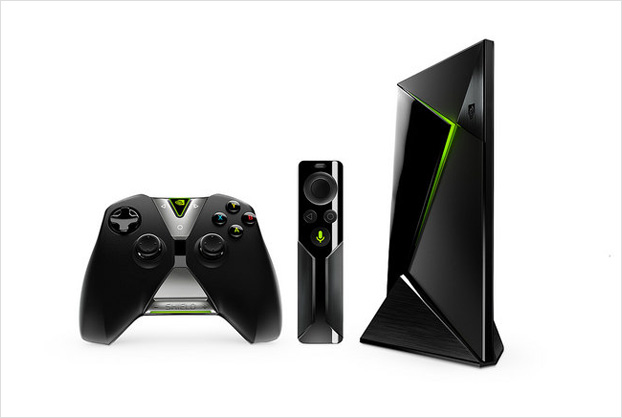 Nvidia’s latest release to the Shield lineup, the Nvidia Shield Android TV, introduces a new product that both Nvidia and the market have never produced before. Nvidia’s recent portable devices presented enhanced mobile gameplay where consumers could play on their Nvidia Tablet while also using a dedicated controller. This latest release from Nvidia is big leap forward in terms of specifications of the device and its gaming capabilities.

The design of the Nvidia Shield Android TV is a very slender rectangular shape that can be placed horizontally on a desk or vertically using a Nvidia Shield Stand. A green light emits from the top of the Shield that doubles as an aesthetic feature and an indicator of the battery level. The power button for the device is also placed on the top of the Shield and can be activated by simply swiping over the icon to power on or off. The relatively small size of the Nvidia Shield should allow it to be placed near any television without issue.

Gaming on the Shield can be done primarily by connecting to Nvidia servers and streaming the game onto your TV. Using this streaming method did not affect my game play with any additional lag or latency. The gaming experience was as smooth as playing a disk game on any other dedicated gaming console. The Android TV hub also allows you to also download games onto the device and save them on your storage drive. Similar to loading to a game from a Steam library, this feature should be familiar to most PC gamers. Additionally, the Nvidia Shield allows one to stream a game directly from their own computer equipped with a Nvidia card nearby. Streaming through my PC onto my television similarly resulted in zero latency and I was able to play uninterrupted.

The Nvidia Shield streams through the Android TV hub which comes with access to many of the latest TV shows and movies. While not as popular a streaming platform as Netflix, Android TV has a large quantity of hit TV shows and movies that should satisfy most consumers. The device is also equipped with Google Cast giving it iOS and Android mobile compatibility. The streaming capabilties along with the gaming aspect of the latest Shield product should appeal to a large selection of students. Cheaper than other products on the market, the streaming aspect should be fun for most students who enjoy TV, while the gaming aspect can appease both console and PC gamers.

As a columnist for "Gadget Grid" and "New Gizmo Blog," Damian has written and reported on a variety of technology-related topics (in six countries, across three continents!). As an entrepreneur, he is a valuable asset in the growth of Students.org technology pieces, our overall direction, and our long-term goals.
View all posts by Damian Chen →