By Lisa Amato on January 14, 2014 in Our Stories, Programs, Self-Assessment 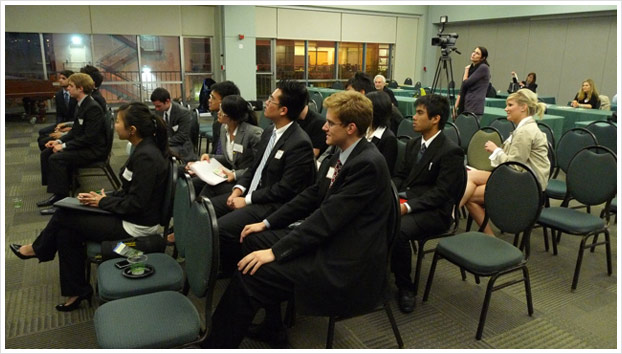 In my first two years of university, I was set on finding a job in human resources after graduating. I attended information sessions and noticed that the majority of company representatives there were in HR. I could see myself doing this; touring schools and talking to students about what the company does, interviewing them and deciding who would be a good candidate for our company. Yes. For someone who liked talking to people, teaching people, and giving presentations, it seemed perfect.

Thing 1: “You can’t do that right out of university”
I eagerly attended information sessions and job fairs to enquire about any vacancies in the HR department – after all, every company needs HR. With this in mind, I assumed there would be plenty. I talked to accounting firms, who gave me looks like they were thinking, “We’re an accounting firm. We’re hiring accountants…”

No one was hiring for HR. One rep was nice enough to explain to me that their company didn’t hire students to work in HR; they preferred to post internally for those jobs to hire people who’ve worked in the firm and know the company from the inside. Their advice? Get a job in another field first, and move to HR afterwards. Oh. Ok.

Thing 2: The Interview
On a conference executive committee in my fourth year, I met an HR rep from our major sponsor. By this time, I had switched my focus from HR to marketing. From the meetings he attended and recommendations from my peers, he knew I was a hard worker and that I was still on the job hunt, so he brought me in for an interview. He asked what field I wanted a job in, to which I replied, “Marketing.” He said, “We unfortunately don’t have any marketing positions available, but there is an open HR position.” Ok – that was my second choice, and I wasn’t going to be picky about a job prospect. Let’s hear it.

When he explained the job to me, it was not at all what I thought HR would consist of – or at least not the “kind” of HR I wanted.

I’d be posted in a factory, working with 20-30 middle-aged men. They would likely approach me with family issues, illnesses, general complaints, or ask for advances on their salaries. He asked if it’s something I thought I could handle, to which I said, “Yes, of course.” Inside, I squirmed and thought, “But I don’t want to.”

Suffice it to say, and to my relief, he didn’t offer the job to me – we both knew I wouldn’t be a good fit. As stressful as it was, I held out until I could find a job that more closely fit what I wanted. I learned to thoroughly research a position before assuming it’s what I wanted to do. It turns out HR wasn’t right for me after all.

Do you have a similar story? Share it with us on Twitter @StudentsDotOrg or email it to us.

Check out Jenny Lugar’s post on Maclean’s On Campus: How Traveling After Graduation Helped My Career