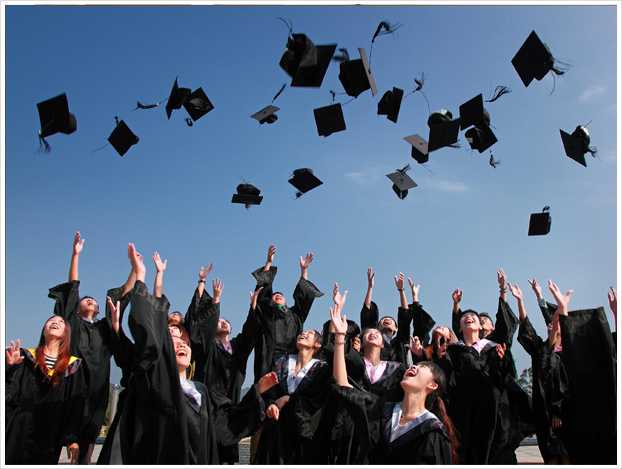 If you have attended a graduation ceremony, you are likely to notice a rainbow of colors on the caps and hoods of the students. These colors are not random but have academic and historical significance. Your university probably gave you your graduation gown specifications – but did you know that academic regalia design is governed by a voluntary inter-collegiate code?

Graduation Gown History
The tradition of academic gowns goes back to the 12th century when medieval clergy wore them while studying or teaching. These gowns were originally meant to keep the wearer warm, but over time became the symbol of an educated individual. By the 14th century, the gown design became more elaborate, representing the field, level of education and profession of the wearer. After the American Civil War, the attire became symbolic and has since been worn at ceremonies only.

The American Academic Costume Code was established at the end of the nineteenth century to set the standard for gown design. While some revisions have been made to the code, the basic design remains largely unaltered. The code is optional but has been adopted on a large scale by universities worldwide.

Gown Design Differences – Level of Study
There are subtle differences in gown cut and shape, based on your level of education. For example, Bachelor gowns are designed to be worn closed, with square-cut sleeves. The width of the hood trim is 2 inches, and its shape is typically the Wales simple shape with a partial white lining.

The Master gown’s sleeve is oblong with a slit at the wrist opening. The width of the hood trim is 3 inches and has a split salmon cut with a full lining of rich, blue silk.

Doctoral gowns tend to be most elaborate with bell sleeves that have three velvet bands on them. The color of the gown may also be different, to be decided by the university. The cap will have a golden tassel, worn to the left. The trim color of the gown will change, with Ph.D. holders permitted to wear a dark blue trim, and Th.D. holders a scarlet trim, irrespective of their field of study. The width of the hood trim is 5 inches with panels attached to the side and a full inner lining of crimson silk.

Similarly, accessories like stoles may be used to highlight the level of academic study. The stole colors will change – for example, diploma and associate diploma holders may have pearl white stoles, while graduate certificate and graduate diploma holders may have gold stoles. If you look through your university’s gown specifications, you will note the minor color differences to categorize a student’s academic level.

It is recommended that men wear dark trousers coupled with a lighter colored shirt while women wear a dark skirt or slacks with a light colored blouse. Women may also choose to wear a dark dress underneath their gown. Shoes and socks, too, should be dark and formal wear.

This article was contributed by guest author Shweta Shetty.